Pleased to announce Pamela Sahel’s new recording of the Adagio-Toccata for 2 piccolos on Solo Musica, distributed by SONY MUSIC.

The recording features Nicola Mazzanti as her duo partner and pianist, Igor Longato. 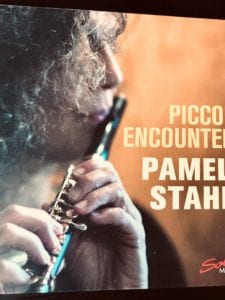 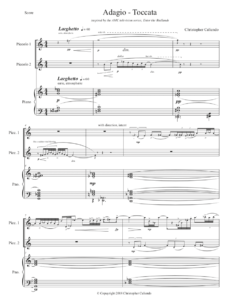 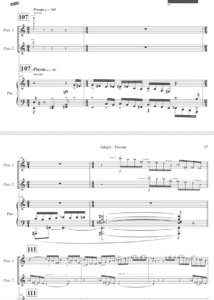 The recording is available here:

The sheet music can be purchased here:

A seamless single movement work whose connecting outer movements feature a cadenza for the 2 piccolo soloists. The work was inspired by the AMC TelevisionSeries – Enter the Badlands.

The Adagio-Toccata is based on the novel the Red Horse by Marca Barrett. Based loosely on facts, the novel depicts the story of Pedro de Alvarado  the Spanish conquistador of Guatemala whom acting as Cortez’s principal officer conquered the highland of Guatemala during the early 16th century. Subsequent expeditions were required to conquer San Salvador where he looses his first wife Francesca de la Cueva who dies shortly after her arrival in America due to malaria. Ten years after widowing, Pedro marries the sister of his first wife, Dona Beatriz de al Cueva then fights to suppress the Mixton natives of the Mayan region of Mexico. It is during this war that  Alvarado is forced to retreat.  After an unsuccessful assault Pedro is  crushed by his own red horse that looses its footing. Beatriz hears of her beloved husbands death and mourns him by painting the inner rooms of their castle  black. She dies while doing so along with the destruction of the city of Guatemala by the terrifying volcano called “de Agua”.

The 1st movement introduces the power of the Spanish empire, the mystery of the Mayan culture and the brutal personality of Pedro de Alvarado.

The Mayan theme GF22 taken from the ascending scale pattern of the prime transports us into the music of conquistadors the empirical power of Spain’s golden era.  Traditional tonalities  derived from the pitch collection depict the empirical strength of Spain.

The piccolo enters performing a melody suggestive of Mayan folk music over a d drone. The music gradually depicts a more atonal nature creating an unsettling quality, a fore-glimpsed doom of events that can only lead to blood, war, the decimation of a culture, and blind glory.

The themes of Spain, the Mayan culture and Pedro’s ambition slowly ritard and decrescendo, material guiding us to the 2 piccolo cadenza which in actuality is Pedro himself, affording his men a brief repose before impatience, arrogance, ambition and visions of personal glory compel the material to recapitulate the Andante section, marshaling his men forward.

The Toccata presto maintains a continuous tempo based on a variety of rhythmic configurations. The music depicts the concrete elements of the terrain of Guatemala which the Spaniards had difficulty acclimating. Ambushed by the Indians, subject to unfamiliar climate and disease governs the form of this section.

The climax of the composition culminates with the death of Pedro, crushed by his red horse , the death of Beatriz his obsessed wife, the eruption of La Agua, and the resultant destruction of Guatemala. .

The Adagio-Toccata in 2 movements is approximately 17 minutes in length.

Music from the Tower Radio Program

The Power of Transferable Skills

Why we need Musical Theater

Why we need Musical Theater

PLEDGE TODAY – WE SO APPRECIATE IT! WALLIS AND WINDSOR Set in 1930’s London, WALLACE AND WINDSOR is the extraordinary true story of two Kings. Brothers. One who gives up the throne for the woman he loves . The other who must take his brother’s place in history by embracing the throne and with the

I had the opportunity to interview Christina Steffen after she recorded and performed  PRAIRIE with the Desert Echoes Flute Choir online. Our 25 minute conversation included the history of the group, the technology used to organize the performance of an online performance, the works original inspiration from one of my 20th Century Fox film scores and the future

VEN A MIS BRAZOS for 4 FLUTES

Ven a mis Brazos was one of the original 10 American Tangos composed for the CD release, Torbellino in 1997. Since then, it has enjoyed numerous arrangements in the Caliendo World Music Publishing Tango Americano collection. One of them is for four flutes – 3 C flutes and piccolo. Mahfrin Santoke, an MFA graduate at

The Cello Concerto No.1 was written and dedicated to Armen Ksajikian, principal cellist for the Hollywood Bowl Orchestra and the Los Angeles Chamber Orchestra.  For 20 years I have had the pleasure of working with Armen in the Hollywood recording Studios for SONY Pictures, 20th Century Fox, TCM and others. The following series of video blogs will take

The Power of Transferable Skills

Recently, I did a podcast with Dr. Pelè who is a bestselling author, musician, and host of the PROFITABLE HAPPINESS™ Podcast, where he features the stories of highly successful executives, experts, and entrepreneurs who exemplify the use of happiness to build profitable workplace cultures. Transferrable skills are those strengths and competencies acquired through experience in

My new production, Gypsy Americano,  an original style of music blending dance, American jazz and world Gypsy music was produced in Dallas, Texas a few years back at the National Flute Convention. Twenty four arrangements from the CD Gypsy Americano were released, one of which, “Meriben” was awarded first prize for newly published flute music

Music from the Tower Radio Program

Welcome to the Caliendo World Music Publishing blog. Your place to talk about the world of music. A little bit about me. Composer, guitarist, conductor, teacher and publisher, Christopher Caliendo has written over five hundred classical/world music compositions, some of which comprise his American Tangos, American Gypsy, Chamber Jazz, Classical Jazz and World Music collections.

The 1924 blockbuster that launched John Ford into Hollywood’s emerging A-list of directors, The Iron Horse is an epic mythification of the American railroad’s birth: a rambunctious blend of historical drama and Western actioner, revenge story and saloon comedy, noble biopic and all-bets-off tall tale.  As a composer for film and television, Caliendo’s accomplishments include the 20th

Register today to our website to continue your journey along with us.

We use cookies to ensure that we give you the best experience on our website. If you continue to use this site we will assume that you are happy with it.OkPrivacy policy